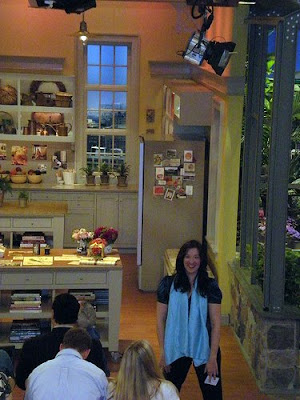 Perez Hilton as the celebrity guest (Jen and I TOTALLY called that one!), a segment taped for a later date with Martha sampling 27 different hot dogs (surprisingly entertaining), AND a parting gift of an HP all-in-one printer? Who could ask for more? My day at The Martha Stewart Show was filled with tons of fun and a bit of the unexpected. Jen and I arrived right on time and had the pleasure of meeting fellow Posh Mamas, the Partybluprints Girls! They blogged live from the show, and even included a picture of Jen and I in their post! If you’re a Posh Mama, check it out HERE (along with the MANY comments they got!). After getting our tickets, heading through security and a pre-show briefing, we were led into the studio.

Jen was packin’ a laptop (which unfortunately lost juice) and was seated in the main blogger section. Some of our favorite bloggers were in attendance. The Wedding Bee and The Cupcakes Take The Cake Girls, to name a few. Jen was lucky enough to get a mention from the she CTTC Girls as well! As a designer of wedding stationery, and fan of Martha Stewart Weddings it was also fun to see Darcy Miller in action!

I was slightly bummed that Jen and I wouldn’t be sitting together, until I landed my own awesome seat in the FRONT row…up close and personal. And right in front of the GORGEOUS set they use for the crafting segment (I thought that was meant to be), as well as the “potting shed” set. The entire studio is really beautiful and very impressive. I also had the pleasure of being seated next to some of Martha’s team from Sirius Radio Channel 112. You can see their post about the show HERE. That’s me in the second picture down, turned around and seated next to radio host Mario Bosquez of “Living Today.” They also gave a shout out to our site sweettalkboutique.com! Thanks guys!

The guests were terrific. I learned about a few blogs I had never heard of, such as A Year of Evenings (everyone in the audience was lucky enough to get a copy of the book inspired by their last blog A Year of Mornings) and A Way To Garden. I’m not much of a gardener (yet!), but this blog is really beautiful. I also came away with a ton of ideas for this blog (read: changes). It was inspiring to be around so many people, including Martha, who really do seem to enjoy the blog medium as much as I do.

There’s more to tell, and I’m well known for the run-on post, so I’ll save some more for tomorrow. Thanks so much for your encouraging and supportive comments, and if you have any questions about the Martha experience, I’m happy to share…ask away!

7 Responses to "Me…on The Set of The Martha Stewart Show!!"