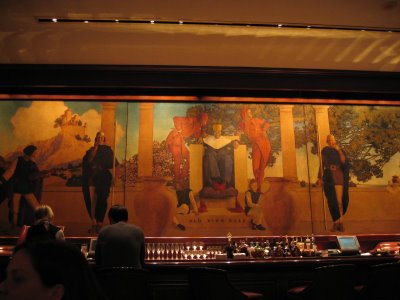 As a freshman in art school I became enamored with Maxfield Parrish. A highly innovative and creative painter, Parrish also had an illustrious illustration career. You know when you’ve had a color named after you (“Parrish Blue” in this case), that you’ve pretty much made it in the art world. Not long after discovering Maxfield, I determined I needed to see his work in person. Did I head to the National Museum of American Illustration in Newport, Rhode Island (a state I used to live in no less!)? No. How about the Philadelphia Museum of Art? Nope. Instead, I waited 10 years and dragged my family on a hotel bar tour around New York City. And one freezing cold late December day, I got to warm up with a cocktail and some bar snacks, while sitting in front of Parrish’s 1906 mural depicting Old King Cole. Forget summer vacation at the beach, I’ll hold out for a brisk wintertime walk down 5th!

Located in the posh St. Regis Hotel (55th Street B’twn 5th and Madison), the intimate and inviting King Cole Bar Lounge is tucked away from the vaulted ceilings and gilded interior of the hotel’s expansive lobby. Dark wood and dim lighting in the seating area make for cozy conversation. They serve their function and then fade into the background letting the true star in the room shine, Parrish’s mural. I’ve heard the bar can be packed to the gills with a ritzy after work crowd, but during our visit it was quiet and subdued. Most patrons seemed to be shoppers dashing in from the cold for a quick drink or regulars chatting with the bartender. Drinks are pricey, but the family agreed this was a special occasion and the atmosphere is worth the price of admission alone.

Since I took the picture above, Old King Cole has been restored. After being taken down in January 2007, everyone’s favorite merry, old, soul, was given a cleaning and returned in late Spring 2007. I can’t wait to make a trip and check out his new glow. A lot has changed on my end too…the family has grown with marriages, pregnancies, new houses and moves. As a result we haven’t taken another tour, but I’m already compiling my list of hotels (and lining up a sitter!). I was shocked at how my entire family, creatives and non-creatives alike, truly enjoyed this jaunt. I get lots of “when are we going to do that again!?” Hmmm…just as soon as that crisp city weather rolls in and I can line up that sitter.

Thursday, stop in for the second stop on our tour…where I had drinks in the park with one of my all time favorite authors!